In March just as Covid 19 emerged I bought an Acom 2100 new but in an opened box. Seems that the Vendor had sold it to someone and they sent it back. They reduced the price as an inducement to sell and I stepped in. I asked them, “Well….what’s wrong with the Amp?””— They said “nothing”. I said, “Ok gentlemen, pardon my skepticism but who buys a $4000 plus amp and sends it back if nothing is wrong?” A sales rep told me, that new amplifier start up processes are vexxing for many hams. Vendors end up doing a lot of basic hand holding he said. To paraphrase, “ many hams don’t know what they’re doing.” Which is generally consistent with what I hear on the air. I read the 2100 manual three times and marked it up like an excited college kid, before the semester starts. Acom has implemented an easy to tune process known as TRI (Tuning Resistance Indicator)I had an Acom 1010 and I am *very* familiar with the TRI procedure. Tuning with TRI on the 2100 is slightly different than with the 1010– but is equally easy. —— In 2018 I bought what one ham calls a “Fischer Price” Toy radio. The Icom 7300. It’s an amusing tag, but appropriate as rigs become ever easier to operate. The Acom tube amps with Tuning Resistance Indicator have taken the “art” of tuning to “Fischer-Price” levels. Just follow the birdie on the screen and you’re done. What? you mean I can’t dip the plate? See what’s happening with the Grid? (Ok ok, you want to know Plate Voltage? Screen Current? Reflected power? more? Hit the next button on the menu.) The multiple fault protections permit an appliance operator to confidently use the amp. So for the many (and there are many) Hams who don’t thoroughly read the manuals of gear they buy— Acom and others are designing simpler devices that require increasingly less technical understanding to operate.—. This disappoints hams who love to pretend they’re performing exacting technical feats, especially with amps—- Thankfully, the tyranny of engineers is being eliminated across many sectors of technology. And that is as it should be. The still large base of 40 and 50 year old amps will fade away with the passing of the geriatric majority of hams.

I have 4 Antennas— all are less than 3:1. No antenna tuner needed with either of my Acom amps. Am I careful? Of course. The 2100 will easily jump up to 2200+ Watts and reflected power is near zilch on a 1.3 to 1. SWR. While TRI puts you in close proximity for maximum power transfer without overdriving— Periodic revisiting of settings is valuable for minor positive adjustment. New Hams! Don’t buy the antique radio relics of the last century. Step up and enjoy no-fuss contemporary practices.

For those interested in Acom’s TRI process. See the PDF Manual HERE. Section: 4-4

Disclosure: About a month in with my new 2100– one day it would not power-up. I ran the error codes and photographed them–(I did not download the Excel template to interpret the data) and I dutifully sent the problem description to HRO. Their Acom/Tech– identified the fault immediately as a factory recognized flaw. HRO turned it around in 5 days from drop-off to pick up. — Which a local kid in the neighborhood happily drove the 90 miles to HRO — He never got out of his pick up– HRO was ready at the door when he pulled up and off loaded it— Same on return 5 days later. I operate about 10-12 hours a week. Zero issues since.

What I am reading: 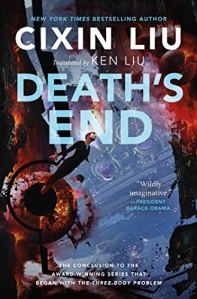 I finally finished book 3 of Cixin Liu's Trilogy. “The 3 Body Problem”— it is “packed with a sense of wonder.”said the Wall Street Journal. I’m mentally spent so profound is the story.

Humans May Be the Only Intelligent Life in the Universe, If Evolution Has Anything to Say. Click the PHOTO